In this post, I will offer my final thoughts, and concluding remarks about review of VPS Nexusbytes VPS.

As mentioned in part one and part two, I was reviewing two Virtual Private Servers (VPS) by Nexusbytes LLC in the month of October. One of them is in Germany, and the other in New York. I named them Tweeledee and Tweedledum, respectively – a reference to the characters from

I have added scores from geenbenchV4 tests that I ran today, October 30th:

Over the past three weeks, I ran several tests and installs of operating systems. Here are some of the benchmark tests run :

Of the above, I used Debian 10 the most, both with and without encryption. Tweedledum was running on CentOs 7 very briefly, i.e. for less than a day. This was mainly for trying out centminmod (which I did not end up using anyways).

It was not a smooth sailing- one of the hiccups included freeing up of Virtualizer for tweedledum (Germany) for nearly 24 hours. I was unable to boot the VPS, or reinstall the pre-configured Operating Systems or even a custom iso. This was a result of Nexusbytes modifying some scripts. It was an easy fix, and problem was resolved without much hassle.

For tweedledum (New York) – I was unable to use the stock Debian10 iso initially. When I finally could, I was unable to try the LUKS encryption for the disk. See Point # 3 in “Notes” at the end of this post.

These are minor hiccups that can and do happen with other providers as well, not really deal breakers. The responsiveness of Seriesn from Nexusbytes was prompt.

Strong Points of Nexusbytes so far:

I have arrived at the conclusion that there are two strong points about Nexusbytes that deserve a mention.

a.The willingness and responsiveness to customer queries. As an example, there was a discussion on low end talk last week. Potential customers tried to propose their specifications and budget for a Linux of Windows VPS. Nahian (Jay) from Nexusbytes was willing to modify the offer within limitations. Below are a couple of screenshots, and you can read the entire discussion here.

b. ‘Seriesn’, from Nexusbytes is approachable friendly, as I have said before. For me, ability to form a connection is also important. At because at the end of the day, you’re dealing with a human being. At times, one may end up dealing with a human for a very small part of that overall transaction. But that quality of experience matters to me personally, and I am fortunate to develop some great relationships over the years.

The ability to chat with them, even BS with them is super useful in developing a long term business relationship. For this reason, I have decided to go ahead and sign up for one of their plans.

Signing up and Ordering

The Nexusbytes website greets you with a bright blue background. It is a refreshing change compared to a lot of web interfaces. I think it’s a customized version of the standard WordPress Twenty Fifteen theme. Also be sure to check out their Terms of Service and Acceptable Use Policy. In particular, they do not allow bots, IRC, hosting/ sharing copyrighted material, setting up email spamming systems, and similar potentially abusive services.

In a nutshell, as long as you don’t do things you are not supposed to do, all is good.

There are four services: shared web hosting, reseller hosting, VPS in Germany and New York, and finally- storage VPS in Germany. Note the “free web hosting” option. It is a nice touch. Also a good way to cater to those who really need but cannot afford web hosting fees.

Watch out for the CAPTCHA when you log in every time. It is both good and frustrating because on mobile CAPTCHA code does not display sometimes. (Update: this has been addressed by Jay)

Overall I am all quite happy with the service. Would be happy to recommend that you consider them if you are looking for a Linux Virtual Private Server (VPS) with a good provider. You can always start with a short term plan, maybe start with one of the Thursday special offers or a Black Friday deal. If you like what you see, you can upgrade as you go.

When I had reviewed these test units were gratis. In other words, I was offered the VPS units at no cost for a month’s time. In exchange, I was to provide an independent, unbiased review of Linux Virtual Private Servers (VPS). That is how Parts I and II of my posts came about.

a. For the New York location, Nexus Bytes has leased the IPS from Frantech Solutions. Therefore, when you run whois, you may see a result similar to the below screenshot.

b. The error that I got on tweedledum is probably a Virtualizer issue.

the log stated “There was an error while saving the VPS Data on the slave. Please make sure that the Slave server is working.” 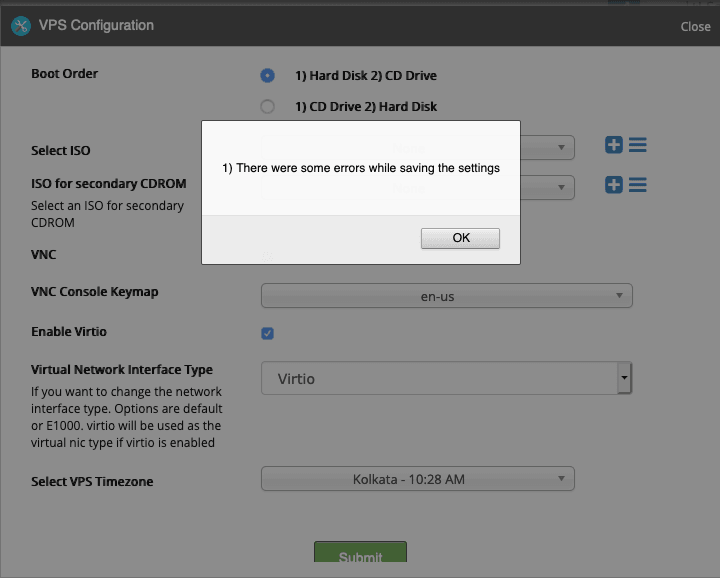 c. In case of tweedledee, LUKS Encryption using custom iso (I used stock Ubuntu 18.04/ Debian 10) did not work. Either in the VPS Configuration menu, the boot order does not change to 1) CD Drive 2) Hard Disk. Or, simply boots back to the stock Debian 10.

For tweedledum, I encountered, a reverse issue . That is, changing the boot sequence did not work. The system kept booting into the OS install menu. Even when I powered off and changed the settings I got the error “There were some errors while saving the settings.”

Note: This error has als been addressed at the time of writing.

d. Hard Disk and RAM specifications (may change in the future)

Explore my other sites

Background: VPSDime had posted an offer for a $ 7 a year OVZ based VPS on LowEndSpirit a few months ago. I decided to install ClassicPress, a fork of WordPress, OVZ on it. I was Read more…

Review of Server Avatar panel for Virtual Private Servers (VPS). With this tool you can add users, configure firewall and CMS like WordPress to your VPS.

My Journey with NAT VPS

In this post, I will write about NATs, and their typical uses. Also read about my experience with using different NAT services over the past year.